Jeff Talbert is the new superintendent of the Canton City School District. Talbert is coming to Canton after working as the Alliance Superinintendent since June of 2013. Previous to that, he served as the assistant superintendent for Cleveland Heights-University Heights City Schools for three years.

A Canton native, Talbert graduated from Timken High School in 1989. He earned his bachelor’s degree from Muskingum University and a master’s from Ashland University. He received his superintendent license from the University of Akron in 2009.

Talbert’s experience includes principal of McKinley High School. His other work experiences have included positions in special education, athletics, instructional leadership and administration at the building and district levels.

We welcome Mr. Talbert back to the CCSD family! 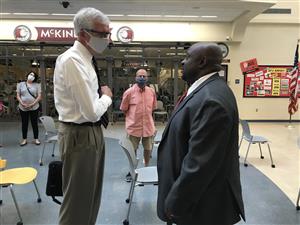